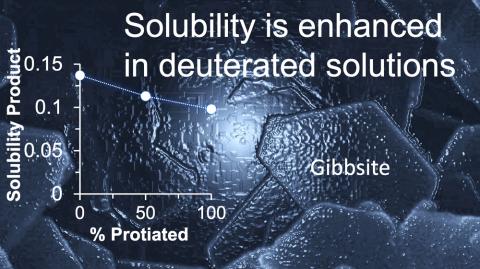 Understanding molecular-scale factors governing the precipitation of aluminum hydroxides, such as gibbsite, under alkaline conditions is important for the formation of laterite deposits, as well as aluminum processing. However, mechanisms enabling tetrahedral aluminate ions to assemble into octahedral sites of the gibbsite lattice remain unclear. Formation of oligomeric complexes has been hypothesized as a critical intermediate step. Here, we report a study of gibbsite solubility in highly alkaline solutions using deuterium substitution to probe equilibrium and kinetic factors that could affect oligomeric intermediate formation, including the reactivity and the diffusivity of aluminate ions. When substituting sodium hydroxide with sodium deuteroxide, solution analysis shows a nearly 40% and 50% increase in gibbsite solubility in 2.4 and 3.3 mol·kg–1 total sodium solutions, respectively. Raman spectroscopy indicated that monomeric aluminate ions are the predominant species in solution irrespective of deuteration. However, both 27Al and 23Na nuclear magnetic resonance (NMR) spectroscopy revealed significant differences in chemical shifts in deuterated solutions, and analysis of 1H, 23Na, and 27Al diffusion coefficients with pulsed-field gradient, stimulated echo NMR spectroscopy shows a decrease in ion diffusivity with increasing total deuterium in solution, consistent with the notion of increasing strength in the hydrogen/deuterium bonding network. Because the relative change in 1H diffusion coefficients are commensurate with the difference in apparent solubility constants, there is evidence for an oligomeric intermediate whose steady-state concentration is maintained by the collision frequency of aluminate ions.