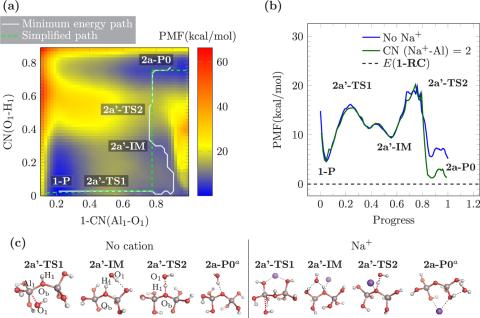 The molecular speciation of aluminum (Al3+) in alkaline solutions is fundamental to its precipitation chemistry within a number of industrial applications that include ore refinement and industrial processing of Al wastes. Under these conditions, Al3+ is predominantly Al(OH)4–, while at high [Al3+] dimeric species are also known to form. To date, the mechanism of dimer formation remains unclear and is likely influenced by complex ion···ion interactions. In the present work, we investigate a suite of potential dimerization pathways and the role of ion pairing on energetics using static DFT calculations and DFT and density functional tight binding molecular dynamics. Specific cation effects imparted by the background electrolyte cations Na+, Li+, and K+ have been examined. Our simulations predict that, when the Al species are ion-paired with either cation, the formation of the oxo-bridged Al2O(OH)62– is favored with respect to the dihydroxo-bridged Al2(OH)82–, in agreement with previous spectroscopic work. The formation of both dimers first proceeds by bridging of two monomeric units via one hydroxo ligand, leading to a labile Al2(OH)82– isomer. The effect of contact ion pairing of Li+ and K+ on the dimerization energetics is distinctly more favorable than that of Na+, which may have an effect on further oligomerization.