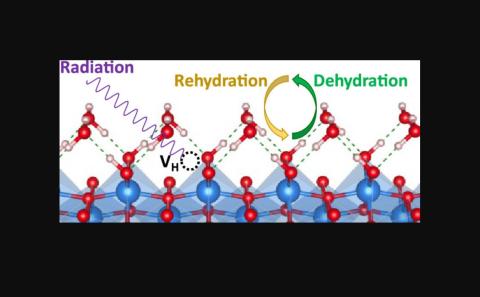 Understanding the reactivity behavior of aluminum oxyhydroxide phases, widely present in nuclear waste tanks, in radiation environments is essential to develop better nuclear waste processing approaches. Recent experiments using vibrational sum frequency generation, a surface sensitive technique, have shown that rehydration of ?-irradiated boehmite (010) and gibbsite (001) surfaces did not allow perfect recovery of their initial surface hydroxyls population. By performing nudged elastic band calculations, we derive an atomistic level description of the proton transfer mechanisms, as could be involved in dehydration and rehydration processes, at the water-boehmite (010) and water-gibbsite (001) interfaces. We found that boehmite and gibbsite surface dehydrations are energetically unfavorable. However, surface rehydration of boehmite (010) is favorable after overcoming an energy barrier of 0.52 eV, which can be structurally related to the orientation of surface hydroxyls that strongly influences the hydrogen bond connection network of adsorbed water. In the case of gibbsite (001), for which the experimental results suggest that rehydration mainly involves the reformation of interlayer hydroxyls, we found that a two-proton transfer mechanism is preferable than a one-proton transfer mechanism, but that it prevents the reorientation of interlayer hydroxyls into intralayer hydroxyls. A detailed analysis of the effect of surface hydrogen vacancy on the strength of hydrogen bond interactions at water-boehmite (010) and water-gibbsite (001) interfaces has been performed. A defect energetic analysis indicates that H2 and H2O are the energetically most favorable products species to form from radiation induced surface H and OH defects.