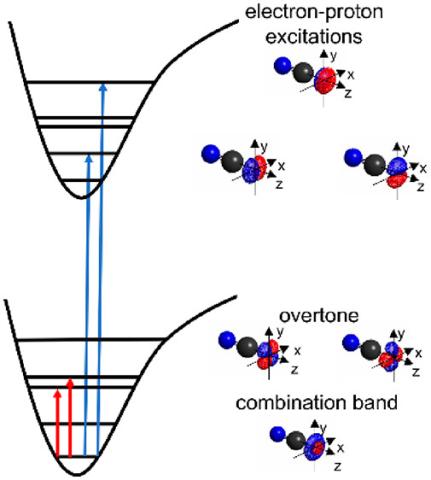 The accurate description of excited vibronic states is important for modeling a wide range of photoinduced processes. The nuclear–electronic orbital (NEO) approach, which treats specified protons on the same level as the electrons, can describe excited electronic–protonic states. Herein the multicomponent equation-of-motion coupled cluster with singles and doubles (NEO-EOM-CCSD) method and its time-domain counterpart, TD-NEO-EOM-CCSD, are developed and implemented. The application of these methods to the HCN molecule highlights their capabilities. These methods predict qualitatively reasonable energies and intensities for a combination band corresponding to simultaneous excitation of two vibrational modes, as well as an overtone. These methods also describe states with double excitation character, such as excited electronic–protonic states corresponding to the simultaneous excitation of an electron and a proton. The ability of the NEO-EOM-CCSD method and its time-dependent counterpart to describe combination bands, overtones, and double excitations will enable a wide range of photochemical applications.