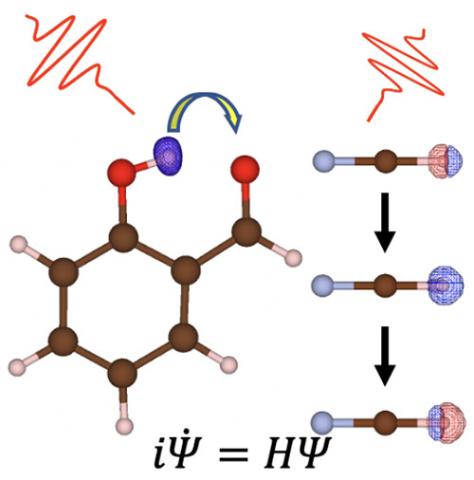 The quantum mechanical treatment of both electrons and nuclei is crucial in nonadiabatic dynamical processes such as proton-coupled electron transfer. The nuclear−electronic orbital (NEO) method provides an elegant framework for including nuclear quantum effects beyond the Born–Oppenheimer approximation. To enable the study of nonequilibrium properties, we derive and implement a real-time NEO (RT-NEO) approach based on time-dependent Hatree-Fock or density functional theory, in which the electronic and nuclear degrees of freedom are propagated in a time-dependent variational framework. Nuclear and electronic spectral features can be resolved from the time-dependent dipole moment computed using the RT-NEO method. The test cases show the dynamical interplay between the quantum nuclei and the electrons through vibronic coupling. Moreover, vibrational excitation in the RT-NEO approach is demonstrated by applying a resonant driving field, and electronic excitation is demonstrated by simulating excited state intramolecular proton transfer. This work shows that the RT-NEO approach is a promising tool to study nonadiabatic quantum dynamical processes within a time-dependent variational description for the coupled electronic and nuclear degrees of freedom.