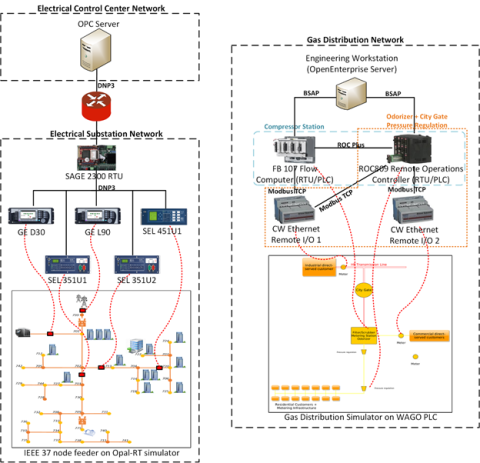 This dataset includes the results of high-fidelity, hardware in the loop experimentation on simulated models of representative electric and natural gas distribution systems with real cyber attack test cases. Such datasets are extremely important not only in understanding the system behavior during various attack test cases, but also in evaluating novel intrusion detection approaches.

The dataset specifically includes the following scenarios, which were created for both the electrical and gas distribution systems as appropriate:

1.    Normal traffic - This test case was to establish the baseline operation of the devices in the test environment.

2.    System fault events - In the electrical system, we created a fault at a specific location on the microgrid system running in the OPAL-RT simulator. Similarly, in the gas system, this test created measurements corresponding to a faulted case on the gas distribution simulator.

4.    Sending a malformed packet (bad CRC) - This test case was to send malformed DNP3 packets with bad CRCs on the electrical system to the SAGE RTU and SEL 451.

5.    Identity spoofing - This test case involved spoofing the identity of the SCADA master (OPC and Open Enterprise servers) to interact with the field devices (SAGE 2300 and ROC 800).