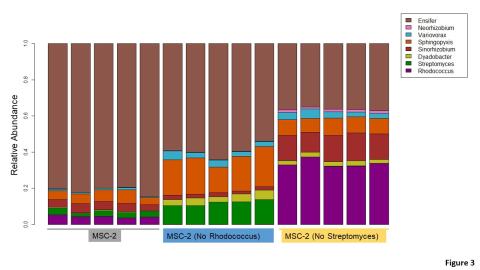 Understanding how microorganisms within a soil community interact to support collective respiration and growth remains challenging. Here we used a model substrate, chitin, and a synthetic Model Soil Consortium, MSC-2, to investigate how individual members of a microbial community contribute to decomposition and community growth. While MSC-2 can grow using chitin as the sole carbon source, we do not yet know how the growth kinetics or final biomass yields of MSC-2 vary when certain chitin degraders, or other important members, are absent. To characterize specific roles within this synthetic community, we carried out experiments leaving out members of MSC-2 and measuring biomass yields and CO2 production. We chose two members to iteratively leave out (referred to by genus name): Streptomyces, as it is predicted via gene expression analysis to be a major chitin degrader in the community, and Rhodococcus as it is predicted via species co-abundance analysis to interact with several other members. Our results showed that when MSC-2 lacked Streptomyces, growth and respiration of the community was severely reduced. Removal of either Streptomyces or Rhodococcus led to major changes in abundance for several other species, pointing to a comprehensive shifting of the microbial community when important members are removed, as well as alterations in the metabolic profile, especially when Streptomyces was lacking. These results show that when keystone, chitin degrading members are removed, other members, even those with the potential to degrade chitin, do not fill the same metabolic niche to promote community growth. In addition, highly connected members may be removed with similar or even increased levels of growth and respiration. Our findings are critical to a better understanding of soil microbiology, specifically in how communities maintain activity when biotic or abiotic factors lead to changes in biodiversity in soil systems.